Your ultimate watch guide: A to Z of luxury timepieces

You can’t help but be in awe of the artistry, precision and imagination of these extraordinary timekeeping works of art from the world’s finest watchmakers. Founded in 1875, Audemars Piguet is one of the few heritage watchmakers breaking rules and pushing boundaries with unconventional designs and aesthetic complexity. The CODE 11.59 collection flaunts sophisticated timepieces, like the Selfwinding Chronograph with a lacquered blue dial and bezel in an 18-karat pink gold case. Double-curved sapphire crystal and an arched profile create an optical experience, while the innovative flyback function enables the watch to restart without resetting.
POA, audemarspiguet.com Since making its debut in the world of horology in the 1980s, Chanel has never failed to deliver opulent timepieces characterised by style and sophistication. With a white mother-of-pearl dial, 18-karat beige gold case set with dazzling diamonds, the French fashion brand’s stunning Première collection reflects the octagonal design of the Place Vendôme, symbolising design perfection.
POA, chanel.com 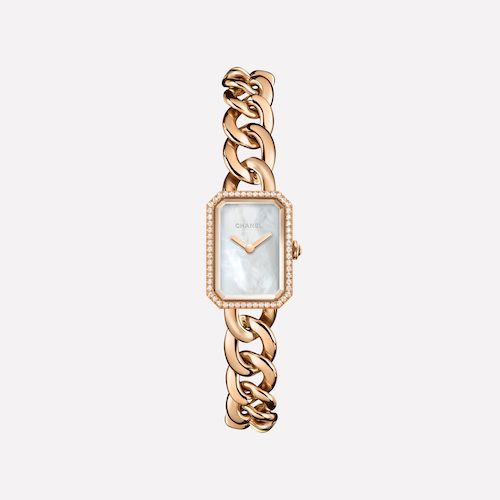 Making his dream of creating a watch manufacturer for the 21st century a reality, Jérôme de Witt launched his namesake company DeWitt in 2003 to share his passion with fellow horophiles. Known for its bespoke timepieces, the French company won an innovation prize for its debut timepiece, the Academia Differential Tourbillon, at the 2005 Grand Prix d’Horlogerie de Genève. Dewitt intensifies the world of chronographs with mesmerising creations including the famous Academia Mathematical – a watch without hands.
POA, dewitt.ch 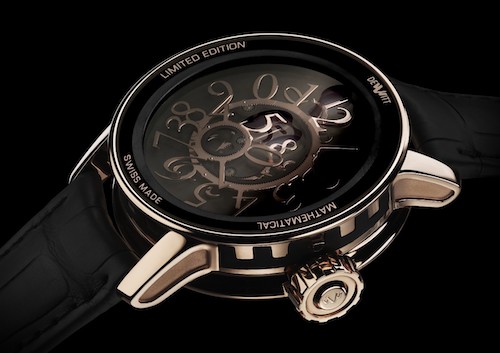 Boasting more than a century of history, Eberhard & Co has become synonymous with research, passion, excellence and innovation. The Swiss horologists have been creating precious, highly technical timepieces which stand out for superb quality and style since 1887, like the Chrono 4 130. The mechanical automatic winding chronograph impresses with anti-reflective sapphire glass, skeleton hands, luminescent indices and water resistance to 50 metres.
POA, Eberhard-co-watches.ch 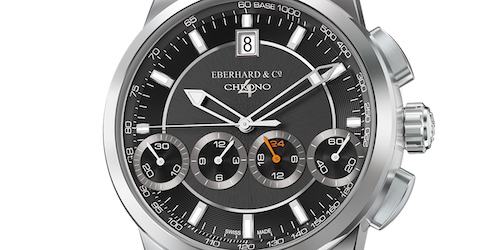 One of the world’s most complicated watchmakers, it’s no surprise Franck Muller’s whimsical Vanguard Crazy Hours collection is as popular as ever. With hour markers around the dial in a peculiar order (eight is at 12 o’clock and two is at six o’clock), it makes for a playful time-telling experience like no other.
POA, franckmuller.com With roots deep in the 18th century, this Swiss watch manufacturer’s rich heritage is a testament to its quest for horological perfection. Girard-Perregaux is synonymous with captivating and imaginative designs, epitomised in the haute horlogerie masterpiece that is the Cosmos. Stemming from the Bridges collection, the galaxy-inspired timepiece is composed of mechanical particles and poetic paradoxes, revealing hidden portions of the night sky with the ‘Earth to Sky’ theme. Zodiac signs pass through the miniature firmament mirroring Earth’s daily rotations. Due to an absent crown, the two time zones are manually adjusted on the back of the Cosmos.
POA, girard-perregaux.com 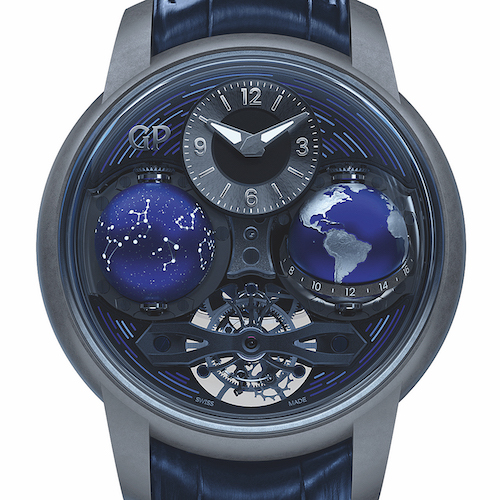 Hublot celebrated a decade of Bitcoin with the launch of the special edition Big Bang Meca-10 P2P exclusively for the world’s richest cryptocurrency users. A trailblazer in technology and social innovation, the limited-edition timepiece can only be bought online using the alternative currency. Once a purchase is made through an ecommerce website, Hublot will engrave the unique Bitcoin transaction number on the edge of the bezel prior to shipping for the ultimate personalised watch.
A$35,000 Bitcoin equivalent, hublot.com 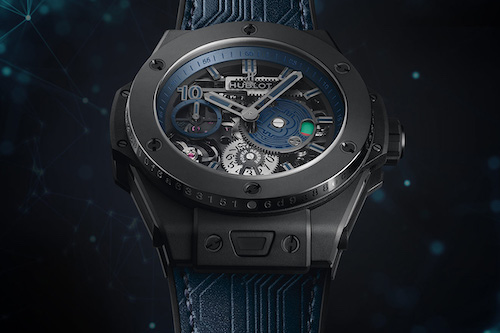 Luxury Swiss watch manufacturer IWC doesn’t do things by halves. Founded in 1868, the maison has produced several iconic collections including Le Petit Prince. With all the typical qualities of high-performing timepieces, the capsules – often limited editions – are highly sought after. As the first IWC piece produced in hard gold (a new version of gold that is up to 10 times more wear-resistant than traditional red gold), the Big Pilot’s Watch Constant-Force Tourbillon Edition is in high demand with only 10 available.
POA, iwc.com 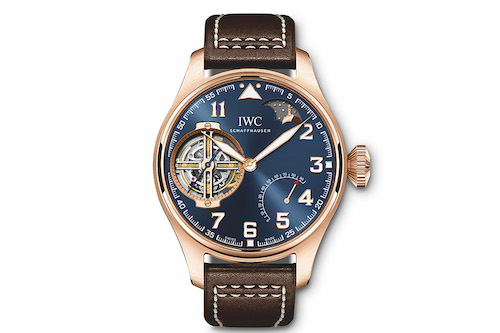 Invented to meet the demand of withstanding a British Army polo match in India, the Jaeger LeCoultre Reverso is a timeless marvel. Its dial is smoothly concealed by reversing the case – a feature originally designed to protect it from potential mallet strokes. The androgynous Reverso flaunts femininity in the jewelled models or affirms its masculinity in an Art Deco aesthetic.
POA, jaeger-lecoultre.com 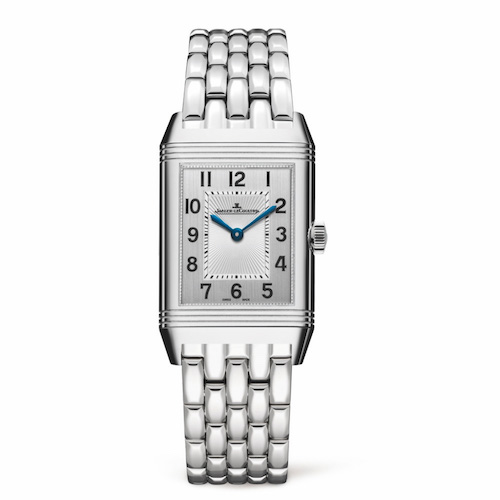 Finnish watchmaker Kari Voutilainen offers intriguing pieces in an industry rife with Swiss creators. The independent horologist made his mark in history when, in 2005, he introduced the world’s first decimal repeater sounding hours, 10-minute intervals and minutes. Since then, the innovative creator has launched dozens of collections made in-house including the riveting Zodiac. The GMT functions at 12 and its hand is adjusted by pressing the crown on the tantal and gold case.
POA, voutilainen.ch While not immediately recognised for its elegant chronographs, Louis Vuitton’s Escale Worldtime Blue is a showstopper. Illustrating the French designer’s tradition of travel with elegance and sophistication, the Swiss watch boasts an exclusive in-house worldtime with no hand complication. The hand-painted city disc containing 26 jewels contrasts against the navy-blue dial, and the brightness of the titanium and 18-karat white gold case.
A$80,000, louisvuitton.com 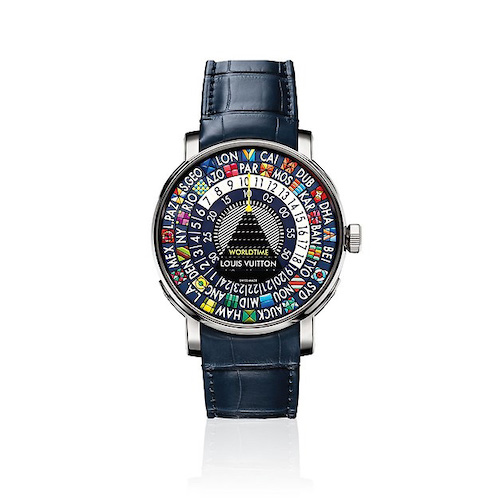 Ideal for the outdoors, Montblanc’s recently unveiled Montblanc 1858 collection nods to the world of mountain exploration in the romantic 1920s while paying tribute to the Minerva Manufacture heritage. A polished satin-finished bronze case framing the engraved Mont Blanc mountain, compass and two crossed ice pick-axes on the case back and khaki-green dials mirror the spirit of mountaineering. The rejuvenated collection was showcased at the Salon International de la Haute Horlogerie in Geneva earlier this year.
POA, montblanc.com 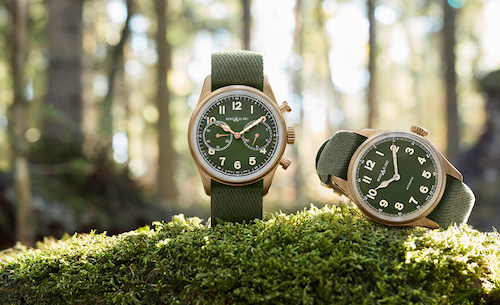 Nomos Glashütte is young in the eyes of horology and its approach to time telling is edgier than ever. The German company was founded two months after the fall of the Berlin Wall in 1990 and specialises in manual-winding and automatic mechanical watches. Geometric worlds collide as the hands of Tetra neomatik timepieces move in circular motions on the square face. An independent-minded timepiece, the Tetra is straightforward, stylish and edgy.
From A$5,470, nomos-glashuette.com 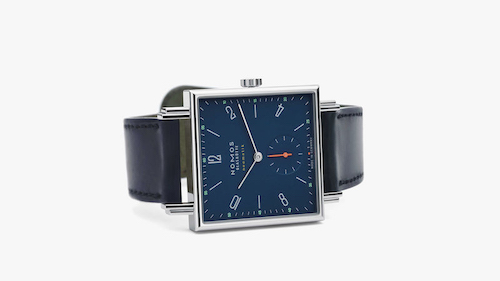 The Constellation has continued to flourish as Omega’s symbol of precision and beauty since its inception in 1952. Now revitalised with a feminine touch in the Manhattan Ladies’ collection, the Swiss watchmaker’s fifth-generation timepiece evokes the modern woman. Inspired by the Manhattan skyline, the slender 29mm design of the Master Chronometer boasts flawless diamond-setting, slim numerals and bevelled edges.
A$32,875, omegawatches.com A classic has been brought back to life by Patek Philippe. The Pocket Watches collection embodies tradition, showcasing artisanship and accuracy through its flawless aesthetic and finesse, and delighting connoisseurs of rare timepieces. Once the main stage on which the Swiss watchmaker demonstrated its high-end watchmaking artistry, pocket watches are now crafted in small numbers.
POA, patek.com By conceptualising and creating the first transparent wristwatch, Quinting found its niche in the world of chronographs. The brainchild of five Swiss engineers, the luxe brand continues to offer extraordinary watches as innovative as its first history-making creation which cost US$15 million (A$21 million) to launch in 2000. Quinting’s Mysterious Chronograph oozes beauty and extravagance. With 11 layers of sapphire, six hands and 11 sapphire discs – both mobile and stationary – the timepiece is irresistible.
POA, quinting-watches.com One of the most recognisable brands on the planet, Rolex is synonymous with prestige, high-precision and unrivalled style. The billion-dollar company’s collection is vast with pieces for yachts, submarines, the ocean, exploration, astronomy and flight. One of Rolex’s most exquisite creations is the Pearlmaster 39. With such a mighty name, it’s little surprise the watch is crafted from 18-karat Everose gold embossed with over 700 diamonds and delivers meticulous precision.
POA, rolex.com 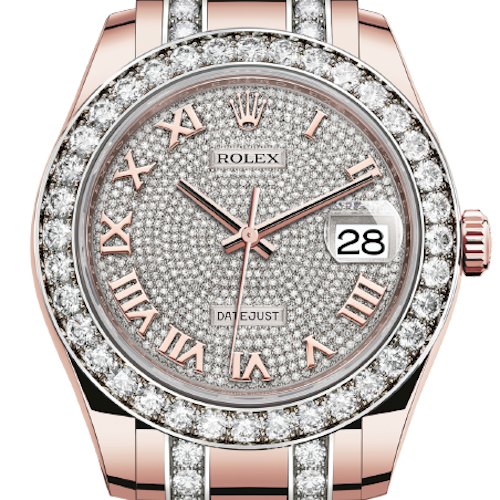 Born in 1881 when entrepreneur Kintaro Hattori opened a shop selling and repairing watches and clocks in Tokyo, Seiko today remains dedicated to perfection and innovation. Grand Seiko, the pinnacle of Seiko’s achievement as a fully integrated watchmaker, offers a line-up of distinctive timepieces characterised by elegance and high standards of precision. The SBGJ213 of the Heritage Collection is manufactured from high-intensity titanium and, for travellers, delivers exceptional accuracy that is not compromised when switching between time zones.
A$10,400, grand-seiko.com 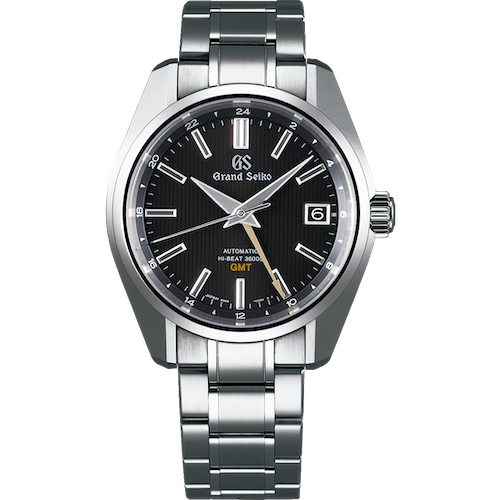 A blend of 19th century tradition and 21st century technology is manifest in Tag Heuer’s Connected Modular collection. Built on a rich history of facing down challenges, the Swiss horologist strives to make its own rules without failing under pressure. Powered by Wear OS, the Connected Modular 41 and 45 were created in collaboration with Intel, making them incredibly versatile as well as unique.
From A$1,950, tagheuer.com Inspired by the ocean, Ulysee Nardin is a pioneering manufacturer of the chronograph world, delivering timepieces to free the spirit. The Classico collection, consisting of dozens of artisanal pieces in beautiful styles, showcases breathtaking complications. The essence of the company is captured in the limited edition Classico Manufacture Manara 0.3, which features a drawing by Milo Manara of a woman jumping from a ship into the soothing waters below on a micro-painted dial.
A$37,750, ulysse-nardin.com From the savannah to the jungle and earth to the sky, Vacheron Constantin brings to life majestic wildlife through hand-engraved precision and master watchmaking techniques. Incredibly detailed timepieces capture the powerful mystique of the Amazon in the breathtaking Les Cabinotiers Mécaniques Sauvages collection that is made-to-order wearable art.
POA, vacheron-constantin.com 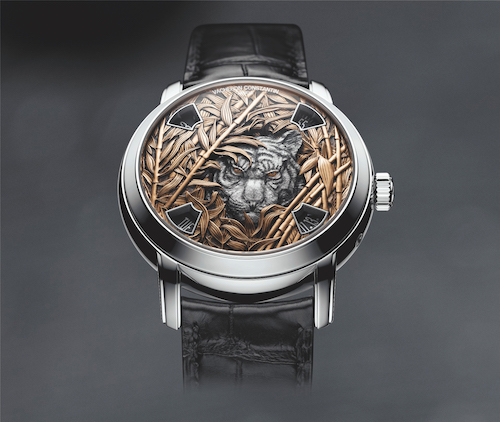 A bespoke luxury sports watchmaker, Wryst Timepieces creates exclusive limited-edition masterpieces. The bold rouge of the Isle of Man TT Red Racing Watch immediately catches the eye, standing out as a tough chronograph worthy of the world’s most dangerous event. Coated in black Diamond-Like Carbon technology – the same used on racing engines, and the most scratch-resistant coating available – the special edition watch exudes masculinity.
A$1,241, wryst-timepieces.com 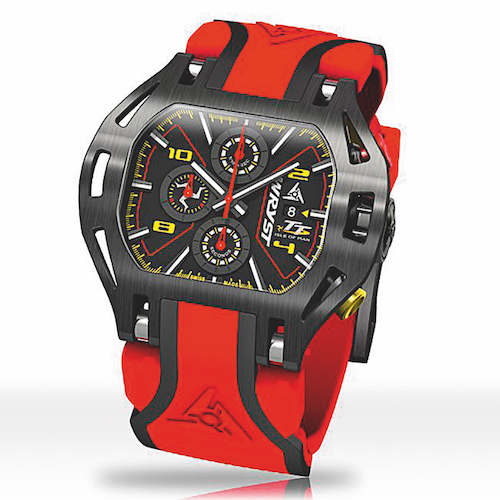 Designed in California, Xetum’s modern watches are inspired by the clean, streamlined characteristics of Bauhaus or the Mid-Century Modern school. The utilitarian designs embody fundamentals design principles including a crisp aesthetic, distinctiveness and universality. The automatic Tyndall rose-gold timepiece has a carbon-fibre dial, is water resistant up to 100 metres and seamlessly integrates 24-hour indicators and a sub-dial.
A$1675, xetum.com 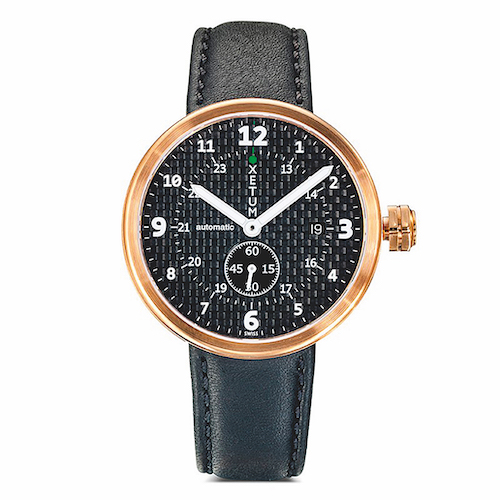 From the North Pole to beyond the stars, French brand Yema manufactures luxury watches for sailing, diving, care racing and space exploration. In 2011, after investments over €3 million (A$4.7 million) and four years of research, Yema released its in-house self-winding mechanical movement, the MBP1000. To celebrate its 70th anniversary, Yema reissued its iconic models including the Superman Heritage which is water-resistant up to 300 metres and flaunts a vintage look in the leather band option.
From A$1,190, yema.com 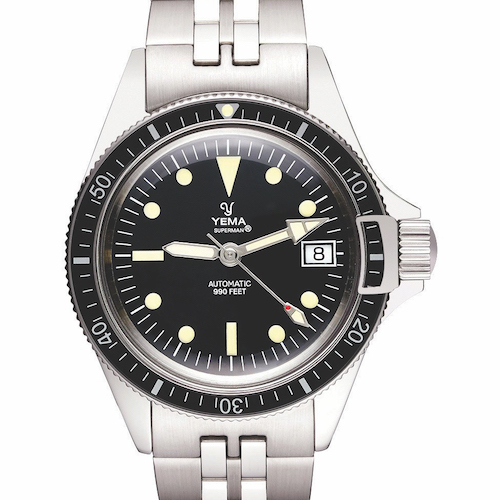 As the Range Rover of timepieces, it is only fitting Zenith and British car manufacturer Land Rover joined forces to launch a sophisticated watch to pair with the next-generation Range Rover Evoque. Indulging in modern and graphic interpretation, the Defy Classic’s Chronomaster El Primero Range Rover Velar is a chic and sporty timepiece which mirrors the automotive’s beautifully proportioned design, colour themes and timeless appeal while enjoying its own streamlined features.
POA, zenith-watches.com